Jack&Jordan presents Somebody on Armada Music 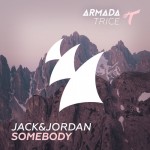 Jack&Jordan presents Somebody on Armada Music

Since being discovered, these 2 British producers Jack Lamond and Jordan Rotary aka Jack&Jordan, have been known as purveyors of the Progressive House sound that combines elements of Deep House lyrical pacing with experimental production.

On their very first track, released on Armada Music’s sub-label Trice, the boys knows where their bread is buttered, spending more time with generation defining musicians, they have found a way to stay true to their sound while all along exploring newfound sonic and musical territory.

For this project, the expectations were as high as they can be, as they merged their true sound with a never-ending lush vocals, with the perfect combination of banging drums (premier and snares) going viral as his video for “Rocka” hit around 20k views on YouTube.

In the age where the creative trajectory of an artist has drastically altered to where artists are ready to branch out when they have only just planted their tree, this track is for “Somebody” with no musical boundaries.