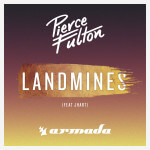 Pierce Fulton’s latest release “Landmines” along JHart, the British American multi-platinum selling singer, songwriter, record producer and arranger from Los Angeles is much more than just a collaborative track. This new release on Armada Music, is one of three to be released, so not to blow away the great success that meets the considerable hype surrounding its debut, “Landmines” certainly features 2015’s top-selling dancy vibe and an never-ending energy, making this track, a lot of fun to listen to.

Being very well known as an Electro, Progressive House producer, releasing stuff mainly on Cr2 Records, yet again Pierce doesn’t betray his followers, but as they all know, Pierce is under a major influence of shaping his own sound, hence the reason why “Landmines” does sound more Dancy, some may say, even a bit Trancy, something that I can easily relate to. So, for all his listeners, this is a great chance to see Pierce figuring out what’s stylistically next for him.

On the other hand, James Abrahart aka JHart is the star of the show, as the track is highly covered by his vocals, a full remembrance of his vocal skills, something that we already know he is very capable of. Within the EDM (Electronic Dance Music) and EMI (Electronic Music Industry) he was working with the likes of Paul Oakenfold on “Surrender” in 2012, Dirty South on “One Breath” in 2014, Tritonal on “Untouchable” in 2015, or else Derulo & Hardwell on the track “Follow Me Home,” this time again, he does something to resonate his ‘cemented position in the American music scene as one of the most influential young writers of his generation’ (Wikipedia)

Listening the song’s lyrics, one can get a very good in-depth perception that holding on to nothing, it gets you nowhere

This is their first joint venture, but I am hoping for some more anthems from Pierce and this guy James with a huge ‘Hart’ for music!