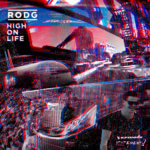 After building a ton of momentum through a myriad of live plays and features on high-profile radio shows across the Trance scene, Rodg’s debut album finally sees the light of day. ‘High On Life’ has been put out on Amsterdam-based record label Armada Music today, hitting #11 in the iTunes US Dance Charts mere seconds after its release.

From title track ‘High On Life’ to tracks such as ‘Alibi’, ‘Flaked’ and ‘Wired’, Rodg’s debut album harbors full range of irresistible cuts. The album is perfectly balanced between fresh creations and tracks that have already proven themselves as fan favorites, with ‘Fire’ (feat. Patrick Baker), ‘Heatwave’, ‘Artefact’, and ‘Leave A Light On’ (with Ruben de Ronde and Louise Rademakers) as sterling examples. Additionally, a lot of the album’s tracks had already reached a worldwide audience before today’s release of the album, racking up multiple plays on Armin van Buuren’s A State Of Trance radio show.

Rodg: “‘High On Life’ is about enjoying life to the fullest. For me, the past two years have been absolutely amazing. I’ve traveled to so many places in the world and met so many people. Everything from playing at Ushuaïa, A State Of Trance Festival and amazing Armada Nights in Asia to simply grabbing drinks or dinner with friends and family or enjoying a quiet evening at home made me feel ‘High On Life’. I’ve tried to translate all of those experiences to an album and this is the result.”.