When I’d heard Seven Lions was making a stop in New York on his “The Journey Tour” I thought to myself… I honestly couldn’t have asked for a better birthday gift. I’d been following Jeff’s work for quite some time yet oddly enough I have not had a chance to see him perform live as of yet. For whatever reason the scheduling just did not work out for me in the past.

Keep in mind I am by no means a Dubstep fanatic. In fact before being introduced to Seven Lions style of melodic Dubstep I honestly felt like it was just a bunch of orchestrated noise and I really could not get into it at all. I was also loosing my faith in trance music around the same time after being exposed to so much utterly generic crap. Seven Lions just has a way of combining the elements of Dubstep and trance to create something very magical. He was the artist that changed my view of Dubstep completely so I had to scratch his name off of my bucket list of “must see” artists. Seven Lions is not only limited to Dubstep. Judging by the amount of genre’s he dabbles in including Psy-Trance, Electro House, and Progressive he is clearly a musically open minded individual. 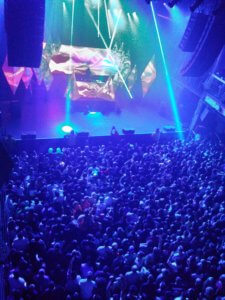 As things finally fell into place, there I was at Terminal 5 eagerly awaiting his performance. The evening began nice and early at 8pm on Thursday and we were graced by GRUM delivering a trancy opening set. Xilent’s strictly dubstep set followed after. Third to hit the stage was Unlike Pluto. He and Xilent were not originally scheduled for this performance at first but they were added as a late addition. I was mostly unfamiliar with Unline Pluto’s track listing aside from a selection of his own productions which I looked into on the web shortly before the event. I’ve seen GRUM, Pegboard Nerds, ans Xilent perform once or twice in the past. All of them are solid acts but there’s nothing like seeing an artist that you appreciate so much for the very first time. The fact that you can’t really predict how the artists is going to throw it down makes it that much more thrilling. Pegboard Nerds came on next. During their set the lighting gradually became more intense with strobes and displayed their signature 8-bit heart on the rear led display. Alexander Odden initially came on stage with braided hair but it wasn’t long before he let his hair down and went into full blown headbanging mode. The two played a bit of Dubstep with heavy emphasis on vocals as well as some pop Dubstep crossover remixes featuring 21 Pilots and one of their final tracks was Rihanna and Calvin Harris’ “This Is What You Came For”. It was during their set that a few mosh pits emerged within the crowd on the main floor as we people watched from the second floor balcony. It’s not the kind of thing I was expecting to see at a electronic music show but it seemed to be a friendly pit as when they crashed and smashed into each other they still turned around to help each other get back on their feet if they fell to the ground. Security did their best to try to break it up but once Seven Lion’s took the stage everyone in the crowd was way too distracted admiring the amazing lasers and on stage visuals to think about anything else. 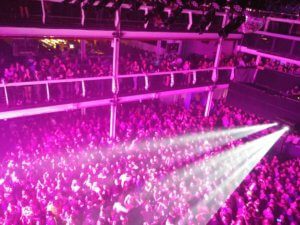 To our surprise Seven Lions set was very versatile spanning across many styles of music within a very short time frame. He didn’t play any particular track for more than two minutes or so ensuring he only played the peak time parts. Many tracks featured the type of jaw dropping bass that feels like it’s punching you right through your chest. It was like a wild roller coaster ride with a contrast of lush melodic lulls and death defying drops. Some of the tracks he played were Seven Lions “Creation” featuring the vocalist Vök, his remix of Oceanlab’s Satellite was a major crowd pleaser as well. You could feel the sheer excitement radiating off each and every one of the fans. There were hands in the air wherever you looked. He also played Ellie Goulding’s “Lights”, and a trance mix of Velvetine’s “The Great Divide” thought I must admit I was hoping the hear the dubstep mix but it’s likely a bit too laid back for a club event so I can see why he didn’t chose that one. The crowd sang along in unison to Seven Lion’s “Days To Come” featuring Fiora. I wish his set time was longer as I thoroughly enjoyed it. I know he would be capable of so much more with his flow if he had more time. Nevertheless this was a stupendous event and I will be sure to catch Seven Lions again next time he is in town. 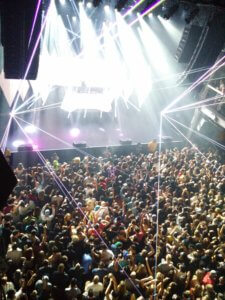 One last thing that I feel is worthy of mentioning again was the production value of this event was fantastic. The sound was on point… no tinnitus upon exiting! There were lights, lasers, visuals galore. It was outstanding and easily on the same level of what you would see at a major festival.