Expanding its adventures to electronic music capitals like London, Amsterdam (for ADE), Belgium’s Tomorrowland and its just-announced Berlin debut, SHINE’s shine has been megawatt-bright throughout 2019. The good word doesn’t stop there either! As much of the planet digs in for winter, SHINE brings news that’ll paint you some altogether sunnier mental imagery. Setting its sights once again on that little spot in the middle of the Med, SHINE today drop their full and complete DJ line-up for 2020’s excursion. Plenty exciting reading it makes too!

Having packed events at the freshly renovated Eden in 2019, SHINE resumes operations at the fabled San An nightspot from July 9. Headlining (naturally!) all 11 of SHINE’s events will be trance trailblazer Paul van Dyk, while its other DJs mainstays Aly & Fila will be touching down for no less than 5 of the shows. SHINE in 2020 has also given Paul an opportunity to flex those open-till-close muscles, performing a pair of all-night-long, six hour sets during August’s high season.

The first and penultimate nights of its season-long run will see SHINE debut-host some other trance royalty. July 9 sees Ferry Corsten deck-side with PvD and the two Alexs (M.O.R.P.H. and Ryan). Further into the season Sander van Doorn will be casting some of his Purple Haze over Isla Blanca, with his SHINE sign-in on Sept 10.

And all that’s just for starters! Throughout the season SHINE will be bringing in (or back!) an incomparably talented cast of party-starters. DJs Paul Thomas, Bryan Kearney, Grum, John O’Callaghan, Menno de Jong, Jordan Suckley, Will Atkinson and John 00 Fleming are just some of those who’ll be on hand to rock Ibiza to its core.

The new bastion for trance on Ibiza, White Island nights lie dead ahead. The DJs you already know & love… and the music you soon will. Full line-up details for SHINE Ibiza 2020 are below – tickets go on sale today. (www.pvd.eventbrite.com). SHINErs longstanding or newcoming welcome! 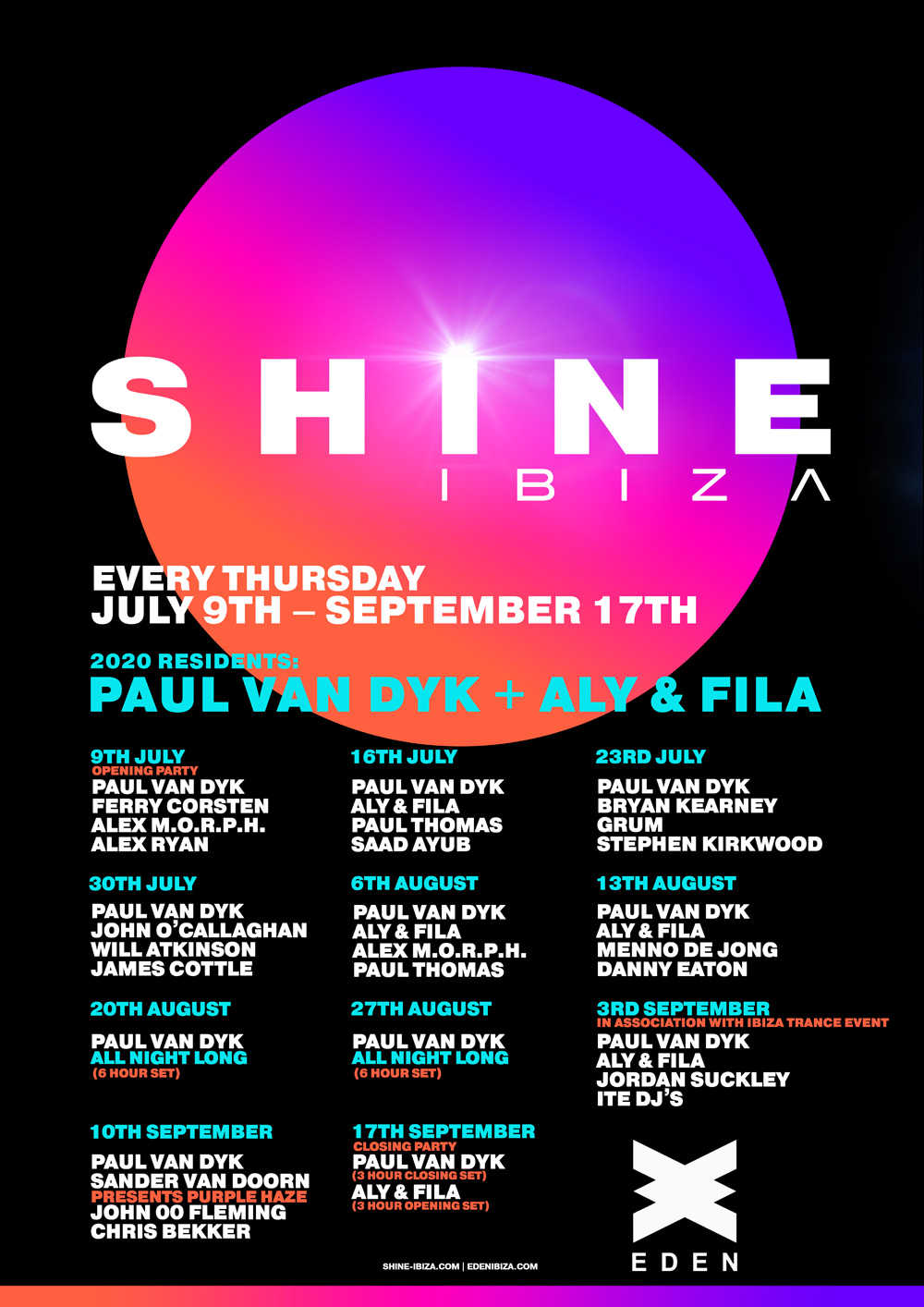