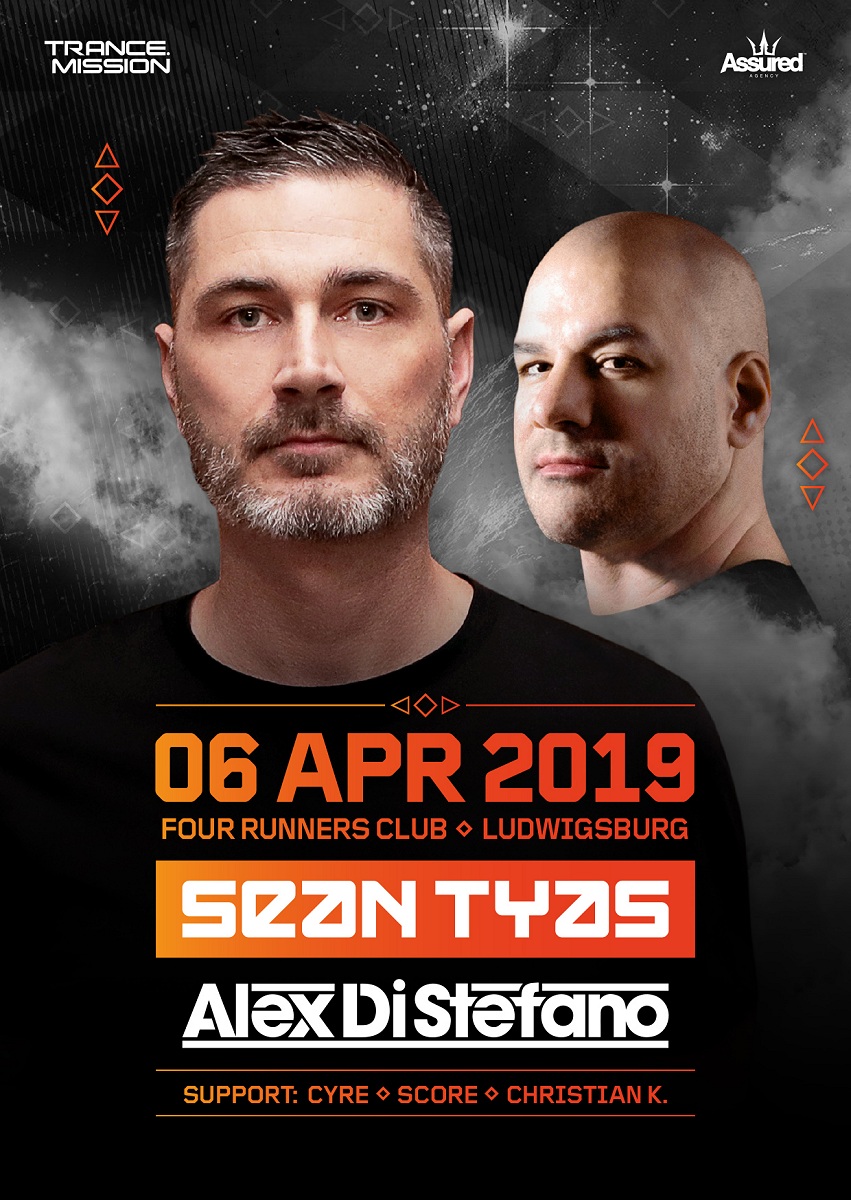 On Saturday, 06.04.2019, it is time to celebrate the 10th birthday of this successful event series! Such a round anniversary will of course lead to a very big and special party, as the Trance.Mission crew has invited two top-class international trance acts to the Four Runners Club in Ludwigsburg – two acts who know how to shake the ground.

Trance.Mission … the name is program! So the makers of the Southern German party series had the idea of establishing the sophisticated trance sound in Southern Germany already in early 2009 – and they still stick to that basic principle. Over the years and the numerous events, some of the biggest international trance headliners have performed on the hip event series – acts like Aly & Fila, Markus Schulz and Giuseppe Ottaviani – but also major German artists such Kai Tracid or Talla 2XLC. The brand Trance.Mission stood for “a fine selection of world class trance” from the beginning – and this is still 100% relevant! Always with the perfect mix of rising talents, big names and classic heroes. Always trend-setting and up to date. But there is one thing the T.M crew has never forgotten – to stay authentic and to celebrate an event “from the scene for the scene”.

So that’s all also valid for the 10th birthday! The first headliner of this anniversary is SEAN TYAS. The likeable New Yorker moved to Switzerland long time ago, where he began his great career. He achieved his breakthrough in the trance scene in 2006 with his first single ‘Lift’ on Discover Records, which immediately climbed to the first place at Beatport. This tune was followed by a steady stream of other No.1 hits – including his memorable remix of Dash Berlin & Emma Hewitt’s ‘Waiting’ and his groundbreaking single ‘Seven Weeks’. In addition to remixes for Above & Beyond, Tiësto and Gareth Emery, various co-productions with Armin van Buuren, Simon Patterson and many others have emerged. With his energetic sets he can boast at the world’s most important festivals such as Tomorrowland, A State of Trance, Ultra Music Festival, Gatecrasher, or in the most exciting clubs such as Privilege, Avalon and Exchange. No matter where Sean plays – everywhere he brings the masses to ecstasy with his special ‘Tyas Sound’ – which is a mix of melodic harmony, exciting groove and pumping basslines!

ALEX DI STEFANO from Italy will provide his famous punchy and innovative tech trance sound tonight! Alex has been active as producer, remixer and DJ for many years now. His tracks have been released on top labels like VII, Who’s Afraid of 138, Subculture or Kearnage. His performances have already taken him to the biggest events around the planet. So Alex rocked festivals like Tomorrowland, Dreamstate USA, Luminosity, ADE or EDC Orlando!

These two great headliners are supported by the Trance.Mission Residents CYRE, SCORE and CHRISTIAN K.!

So what are you waiting for? It is time to celebrate a decade of trance & passion!

We love to see you Trance!