Exclusive interview with Tunisia for TranceSound.net

Such a thrill to interview these 2 guys and hope we will do that again, later on this year, once they will rock again the clubs they will have on their schedule from September this year.

1. What does Tenishia mean ? is it a name ? where this comes from ?

Joven: It means absolutely nothing, just a catchy name that a girl from, the net came up with when we were searching a good name for our projects..

2. We have read Your profile on Your official website, but we really want to know the feeling and the whole story, at least try to evolve it. In what circumstances did you guys meet and what determined you to form a duo dj band ?

Joven: I didn’t know cyp at first, but he used to come to the club where I use to play, then a friend of his asked me to go to his studio to check him out and then a few days later we happened to meet at a bar where we discussed a lot. Then I went to his studio and it came up that we had great potentiality if we worked together. We both did our own productions at first. Actually it was experimenting and when I hear the tunes we made before heheh we both laugh but still it was our process of learning, no one is born a professor. We have learned a lot when we started to work together, we didn’t just sit down and come up with a good tune but in a matter of months, tune after tune we got better n better, we learned more and more and it wasn’t long since we signed our first remix to voodoo vinyl

3. Now I have a question for both of You please, which is the club that You guys love to play, according to Your profile I reckon Numero Uno is Your club residency, right ?

Joven: No, we don’t have a residency and we don’t plan to have one for now. It’s hard to say which club I prefer most coz it’s the crowd in front of you that makes your night, but I think outdoor events are my favorites, we played all the clubs in Malta and Gozo, well its time for our first international gig I think.
Cyprian: As Joven said, we don’t have a residency right now. As far as clubs go, my favourite club to play is Numero Uno simply because it is an outdoor venue. But I think it’s time for our first gig abroad!!

4. Tell us please, how would You describe Your music style ?

Joven: Our productions vary from banging Tech Trance to chill out, soundtracks. It depends on our mood what to produce next but.. Progressive, Trance with some power ingredients is our Favorite!! Good rhythm, some beautiful quality sounds and some Tenishia Ideas heheh
Cyprian: We do not have one defined music style, it depends on the mood and on which label the track is going to be. But our style can be called Progressive Trance with a hint of Tech!

5. Which are your EDM (Electronic Dance Music) godfathers and also if there are more then one ? I am talking the one(s) that really makes Your day while playing their chooones, mixes aswell.

Joven: hmm.. loads of djs and producers are doing good. at the moment I do like some Ozgur Can’s rhythms I think he has my number 1 on that, but there are plenty more who I like. Junkie XL, Sasha, R Klinkenberg, Markus Schulz, Jose Amnesia.
Cyprian: Too many! but I really like Tonedepth, Jose Amnesia and Junkie XL

6. Back again to the club questions guys, this is again for both of You, how many clubs You guys went to and which one had that best atmosphere so far ?

Joven: We Played all Maltese and Gozitans clubs, I think one of the best was MTV 2005 we really rocked that night
Cyprian: heheeheh…. true true, it was AMAZING!

7. I saw that back in 2005, You guys won a really major prize, Best Newcomers at the BMAs (Bay Music Awards), my question is that once You have reached that special level, now which is Your next target and what other top and major events will attend, something like Love Parade, Godskitchen, or Sensation… are there any for Tenishia in the future ?

Joven: I hope there will be Tenishia in that.. our first international gig is yet to come.. which to be honest at the moment were not focusing on it as were very busy at the studio.. were spending hour and hours working on Kirsty Hawkshaw’s album and Jan Johnston.. we even had to stop our live performances for the moment.. They take a lot of time so we couldn’t afford that..

Joven: Yes for sure, were doing a Karen Overton – Loving arms remix, we did a remix for deepblue records, Horizons, which was played by Schulz in the GDJB, Matt Darey – Eternity and standby for a big remix we did for Jose Amnesia – Entrapment. My favourite remix so far..

9. Now this is a hush one according to my personal track from You guys, I mean, the one that I love the most, which is FIVE (5), which is Your best track ? no need to tell us (all of them) it must be one that You guys really feel close to

Joven: In Malta people first loved us for some personal bootlegs that we did, actually they rocked where ever we played them.. but yes I think Five is one of our best according to people requests on radio and in clubs.. but I think we have much more to offer than that. Many tunes we did are still unheard for now.. have to mention a track we did with Kirsty Hawkshaw called ‘Somebody Out There'[/b].. in my opinion should be a big track, will see
Cyprian: Definately ‘Somebody Out There’ will make its mark….

10. How long do You imagine Yourself being a Djs, as a duo, no need to fall apart and also what will happen with you if (in case) you break up and start Dj’ing on your own ? No need to, cause Tenishia sounds good and also has a really nice sound aswell, but just in case ?

Joven: What`s less in me is plus in Cyprian, and what less in Cyprian is plus in myself.. Splitting up is surely not our aim cause we both worked on our own before but I see much greater potentiality as Tenishia..
Cyprian: Agreed

12. Describe me the feeling of beeing in the club and playing for hundreds of people in one word, and also what was the biggest number that EDM lovers attended any of Your gigs ?

Cyprian: Anyone who has made something Big out of Nothing… Just the will to succeed
Joven: My own mind

14. There is a time in every producer, artist and Djs life that really needs a break or even worse (s)he feels that no metter what they create it’s useless, are You guys satisfied with your work so far ?

Joven: Indeed we accomplished a more then expected in just 2 years
Cyprian: Yes we are satisfied…. but not enough, personally I want more.

15. We saw that several years, actually 3 years in a row, Tiesto got the number 1, most favourite Dj in the world, but who do you think, it deserves do be named the no 1 Dj in the world ?

16. Do you guys sometimes mix alone, what I mean by that, one to be in New York and the other one in London, or do you always mix together back to back ? (for each one).

Joven: We’re a Duo and we have to look like that. Our DJ sets is always a Back to Back session

17. While spinning, what do you prefer vinyls or CDs ?

Joven: Both have their advantages and disadvantages, in my opinion CD players are still a bit far from the Turntable Touch.. but still CD players has more nice functions like looping which you can never make with a turntable.. what really good is that I don’t have to carry my heavy vinyl case.. and still, like it or not..we have moved in this one direction ..CDS

18. Do You guys have have any advices for “noobies” in the Dj industry. Thinking that we all had this moment ages ago, some new and fresh upcoming EDM producers and Djs needs Your attention I reckon

Joven: Well I think determination is the key for everything, loads of new and very young EDM producers are being signed on labels, for their own production and even for remixes.
Cyprian: Be Original and NEVER give up, it could take years for an artist to shine.. but it will be worth the wait!

19. Any other future projects with any other top producers, cause I see lately You guys have a tremenduous effect on EDM scene out there, Kirsty Hawkshaw, Jan Johnston, Jose Amnesia, these are the names that really makes You feel good just by reading their bio, nor the track yet.

Joven: Like you said, were working very close with Jan and Kirtsy. We are both doing productions for their own albums… Lately I called Kirtsy and it happened that Jan was there too, working on a Kirsty & Jan collaborations.. well we might produce that too.. the first 2 vocalists Trance track!!!

20. And now the last one, which is quiet a hunch, what do you know about trancesound.net ? and also say something for the community, even something funny 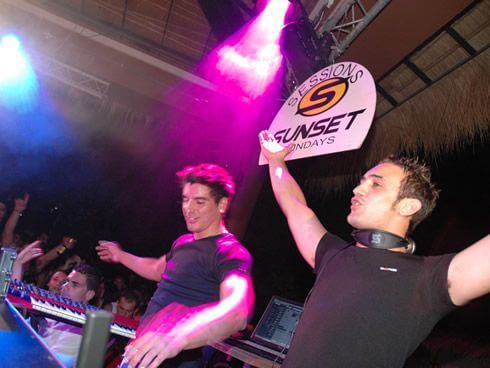