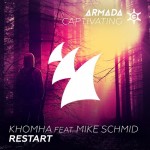 Bearing the weight of his own acclaimed stage name, KhoMha gives this track a heavy workload to its pre-release hype. This time, for the very first time, he reflects his production skills on a vocal track, so what finally came to light was a featuring track with Mike Schmid, released on Armada Captivating / Armada Music. This production is yet another reminder that KhoMha can deliver, in the same hype and tradition with other releases such as “Secret” along with Eddy Karmona, released on Deep Ocean label in 2010. Indeed, it took him some time for a collaboration track, but when he does it, he does it in style!

As we all know, KhoMha also known as Robert Alzate Pasos, is not your typical type of producer to release tracks as a joint ventures with other producers, so whenever he does it alone, his own releases are 101% his productions, hence the reason why this production in particular is a knock out, a musical shifter, something to shout about!

Of the new crop of melancholic Pop song writers and vocalists, invading the underground-to-mainstream airwaves, it may be the Los Angeles based Mike Schmid who was raised to make an impact in the international music stage from his early beginnings. Working with the likes of Miley Cyrus as keyboard player and backing vocalist, Sheryl Crow, or else The Corrs and so many others, Mike became a household name within the global music scene. With such an impressive musical background, the American singer-songwriter open his musical realm to a new chapter, the EDM (Electronic Dance Music) one.

In just one track, Mike attempts to succeed in expanding himself past the work that he’s done both with and for the artists that defined his rise. There’s something in the tenor of his voice resonating on this release, skyrocketing road to excellence that we have now come to expect of late from his career.

On his new collaborative “Restart,” Mike Schmid with Colombian’ superstar KhoMha promise a production like none other, from an idilic intro to an ending that shines here more than ever before and with final message that stays forever in our heart and mind.

One should always know when it’s the best time to ‘restart’!