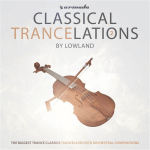 Trance is the most beautiful dance music on the planet. Some of our greatest musicians in the history of our world are classical music composers. Trance has all of the elements of classical compositions. When you strip away the beat, you are left with the beautiful classical music sounds. Lowland has done just that in his Classical Trancelations 2 compilation.

As a follow-up to his first album, Classical Trancelations 2 takes classic trance hits and has turned them into something magnificent. As I listen through the album I can almost picture myself in a large concert hall with conductor at the helm of a large orchestra. Lowland has composed something of a masterpiece that could be performed by not notch musicians.

Classical music and trance music can both be described as intelligent music. There are many layers and instruments in both genres. It’s nice to see someone turning our beloved trance songs into an entirely different genre that a new audience can enjoy.

Rank 1’s ‘Airwave’ is one of my personal all-time favorite trance tracks. Lowland has arranged this song in a beautiful way. For those who are not EDM lovers, but admirers of classical music, this album is something they could really appreciate.

Some of the other trance classics that have been transformed into classical masterpieces for this album are Armin van Buuren’s ‘Blue Fear’ and Dash Berlin’s ‘Till The Sky Falls Down’. It’s nice to hear these great songs that we all know trancelated into Lowland’s orchestral compositions.

Overall, it’s nice to hear something different from a producer. I am glad Armada is putting a new spin on trance and opening up the trance fans to something new and helping us all to expand our musical horizons.

You can purchase Classical Trancelations 2 on the Armada Shop on September 11th, 2015.