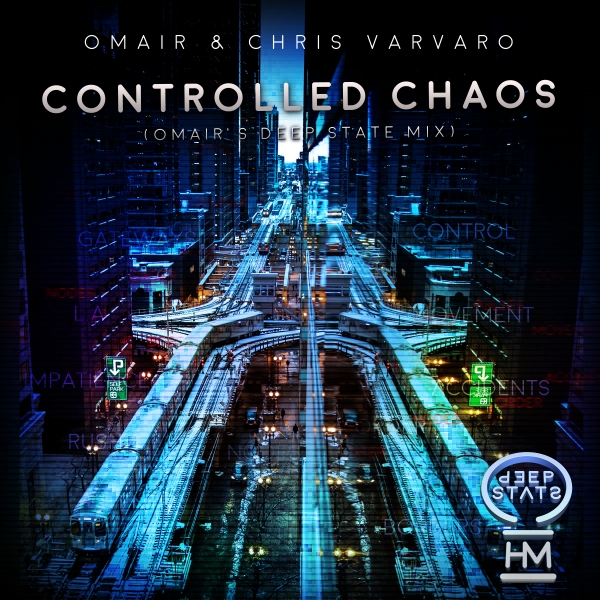 It is time once again to succumb to the dark and prolific stylings of the subterranean realm as OHM Deep State prepares to unlock its 6th dose of auditory magic. What began with the mind-altering soundscape of OMAIR’s “Marianna’s Web” has thus traveled far and wide through the mystical expanse, steering us through a wormhole full of body rocking progressive heaters and high intensity deep house groove sessions. And our nebulous adventure has only just begun! For those among us who yearn for the next level of OHM Deep State sound dynamics, we cordially invite you to come along for a little lesson in “Controlled Chaos” presented by OMAIR and Chris Varvaro.

In true fashion, our fearless leader refuses to be locked in a box as the quest to deliver shock and awe on the dance floor has fueled his latest collaborative endeavor. Breathing life into a genre smashing vision-blend of techno meets progressive house, OMAIR has called on celebrated Billboard Top 40 artist and #pursound tastemaker, Chris Varvaro, to join him in his corner, shaking things up from the likes of which we least expected.

As the anticipation swells, we are greeted with perky sound elements that invoke visions of creatures intermingling from uncharted galaxies. Without warning, we snap to our senses as a sharp kick tickles the air space, sucking us deep down into techno territory as the bassline bonds with playful drum detail. Setting the stage for a festive progressive-centered force field of harmony that wraps us in a blanket of warmth, the multidimensional sound waves feed our addiction for everything high energy and brooding. It is the combination of feeling as if we are set to be spun off into the sultry abyss while being lifted into a soft euphoric atmosphere that gives new meaning to functionally dysfunctional. And this, my friends, is “Controlled Chaos” (OMAIR’s Deep State Mix) defined.