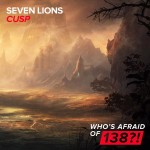 “Cusp” beautifully approaches Seven Lion’s idea of a place where unknown and fiction collides, a very thin line between beauty and strangeness, enough to inspire, and with a track like this, it also proves that he’s here to stay.

From Trance, Progressive, House, Electro and Dubstep, Jeff Montalvo, known professionally as Seven Lions etched out a niche for himself as a producer with a gift for soulful production aesthetics. Right now, we are going to focus on Seven Lion’s Trance and Progressive creations, by reminding himself, that the journey presented in his creations are filled with the complex emotional background that any track faces these days. Edgy, musical and inspirational.

This track is not the only production that sees Jeff a very good contender of being named ‘one of the music producers we should be aware of’ award, having already some notable releases and remixes under his belt. Producing along the Hungarian Trance Kings, Myon and Shane54 on “Strangers” or else remixing the likes of “You Got to Go” and “On My Way to Heaven” from Above & Beyond, “Satellite” from Oceanlab, or else “Still With Me” from Tritonal, “Days Turn Into Nights” from Delirium and most notable “I Don’t Deserve You” from Paul van Dyk, Jeff made highlights with his own unique sound.

The 28-year-old has teamed up with Armada Music’s sub-label Who’s Afraid Of 138?! in order to release this new track, with an artistic and producer formula, which allows for a single vision to dominate “Cusp.” The track is clothed by a thumping type of groovy, melodic and strong bass that carries the track to admirable heights, hitting just about all the right notes as electric piano notes shake it off in the background.

Listen and check the track out!