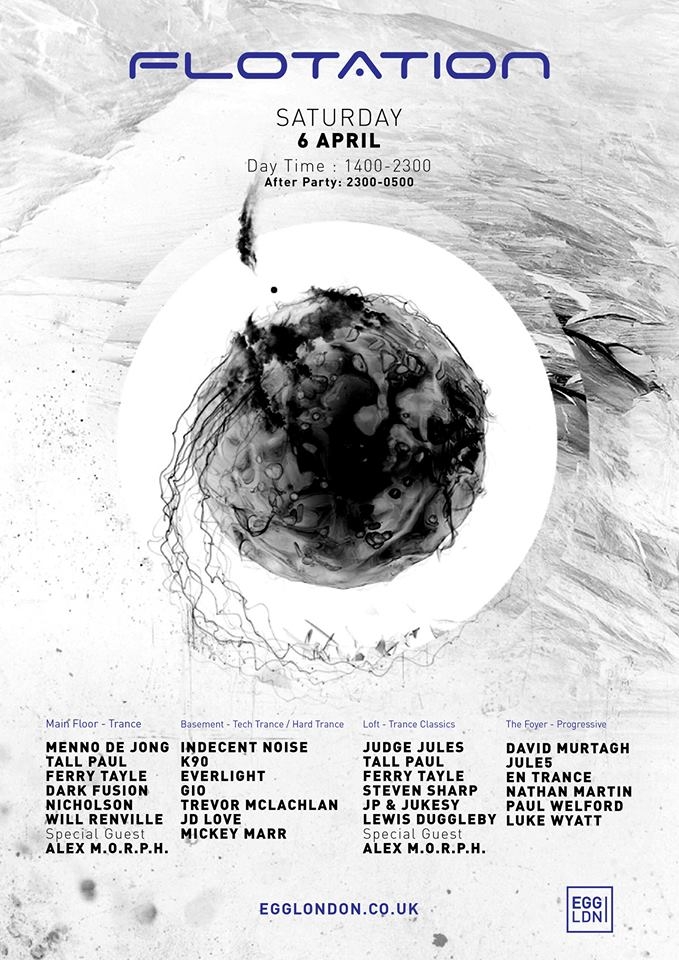 Laurence feels that 2019 is the year for Trance, with many sounds mirroring the early days of Trade with Trance and Techno. The music is coming back around, and with Flotation we aim to have a collection of trance lovers and all good energy people at the forefront. Egg LDN is the perfect place for Trance, with three super outdoor areas, main terrace, basement and classics in the loft and all welcome to join us…

A word from Adam: “With such a deep history in underground dance music, the chance to work with Laurence and his team is an opportunity we could never turn down. We’re driven by passion and wanting to put on the best show for the people, and this will be no exception, having stepped aside from XSF a couple of years ago to concentrate on Trancecoda we’re getting the same buzz and excitement with the creation of Flotation, something special is about to be born at Egg LDN!”

The first event kicks off April 6th at 2pm and then monthly Saturdays following on. Each event caters for all fans of trance from the Euphoric main room sounds, to the darker tech & harder beats whilst up in the loft jump into the time machine and head back to the glory days of 1999!

Our second event lands on May 11th which is where Laurence adds in his extra special Trade-esque stamp on proceedings and things get all twisted with a one-off special Mad Hatter’s Tea Party.

For those that want to carry on in April we have a dedicated after party in Cell 200 starting at 11pm until late.

Flotation After Party at the CELL 200 from 11pm-5am with Alex M.O.R.P.H. – Indecent Noise – Nicolson and more TBA

Egg London is a strictly 19+ venue. Club scan is now installed in the venue at the front door, which means everyone attending Egg must have a valid form of photo ID to present to be scanned on entry. The accepted forms of ID are: unexpired passport, driving license, provisional driving license, photo cards featuring the pass hologram. Photocopies, photos or screenshots of IDs are not accepted.